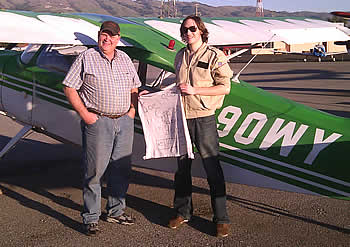 Congratulations to Joel Cretan who successfully soloed Citabria 990WY. Not only that, but his family was watching! Talk about pressure. Nevertheless he made three nice takeoffs and landings. When Joel was back on earth he had his shirttails cut off by his CFI Blake. Well done both!

Another fledgling! Alexander Decater soloed in a Citabria after tutelage from Derick Day. Congratulations!

First new pilot certificate of 2011. Well done to Chuck Roeder who passed his Private Pilot checkride with Examiner Sherry Diamond. Thanks also to CFIs Mark Guerrero and Erik Schmidt for making it possible.

Congratulations to AeroDynamic CFI Sergey Sinyachkin who earned his Glider CFI. Sergey now has pretty much every category of CFI there is. Well done!

Congratulations to Jeff Benzing who is the first fledgling on 2011! Jeff soloed a Citabria after flying with Jim Grant.

Well done to both!!

The next session of our popular Instrument Rating Ground School starts January 24, 2010 at 6pm. Your instructor will be Erik Schmidt.

To see more information and to enroll Click Here