The more observant amongst you may have noticed a new face around the office, and indeed you are right. We are delighted to welcome Kathy Tran to our office team.

Kathy is in the Aviation program at at San Jose State University, studying Aviation Operations . She is also a keen student pilot, getting close to achieving her Private Pilot License, and she aims to get her A&P mechanic license after she graduates.

Initially she will be working on Fridays and covering other days as needed.

News: The Winners of the Holiday Quiz

It was not easy, was it? Indeed some questions were positively fiendish.

Nobody managed a perfect 100% score but even so, several people got close. Here are the results:

2nd (joint) place: Aaron Lepold and Dejan Vucinic with 94% each

Why so many winners? Some of the questions were set up poorly and folks did not get credited by the software. For example, the alcohol concentration question did not accept “.04” as a valid answer.  So when we found good answers that a “normal” human would accept, we adjusted the score.

But at the same time, we did not want to eliminate the people who would otherwise have been in the prizes, so we are giving away extra t-shirts.

The highest of the instructors was Sergey Sinyachkin who scored 89%. Pretty good, especially as he was in frozen Russia at the time. Maybe if we add an incentive for our CFIs more would attempt next time?

Well done everyone, and we will post the answers soon.

A warm welcome to Godfrey Watson who is joining us as an instructor. Godfrey has been flying taildraggers for many years and was one of the very few people Amelia Reid would let fly even if they missed their 30 day tailwheel currency.

We are delighted that Godfrey has joined us! 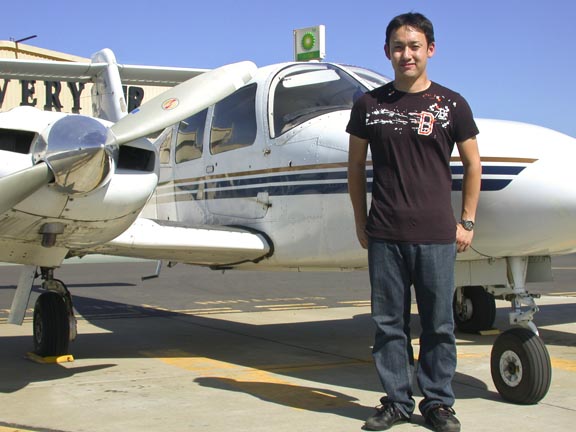 Jumpei is already a Commercial Pilot in Single and Multi engine airplanes, and his next goal is to get an Airbus 320 type rating.

We have a new tailwheel pilot, Steve Huston. Steve flew with AeroDynamic instructor Jim Grant and earned his tailwheel endorsement in Citabria 1806G.

Maggie Gales passes Private Pilot checkride with Examiner Sherry Diamond in Citabria 5032G.  Congratulations Maggie!! And to her CFI Mark Guerrero.  Don’t eat the whole cake all at once!

Everyone who has flown 616SF will be delighted to hear that we have started a comprehensive avionics upgrade.

There’s also a simulator for your PC downloadable from Garmin.

As for the Trig transponder, check out the Trig Web Page

We have added Garmin GTN 650 and Trig TT21 manual links to our Useful Documents web page.  Take a look.

So the good old plane is getting some great new avionics. I hope you’ll like what you see and fly her a lot!

We are trying something new!

On our Web site, you’ll find our Customer Appreciation Quiz. Real questions which will challenge, educate and amuse you. And real prizes – a $100 gift card for Harris Ranch Restaurant  Inn and Shop, “The Proficient Pilot” boxed set of three books by Barry Schiff, and three AeroDynamic T-shirts.

Who can try the quiz? Anyone, but not everyone can win.

Who can win? Any customer who has flown with us during 2011.

Who cannot win? Staff and families of AeroDynamic Aviation, or anyone who has not flown with us in 2011. But of course you can still try the quiz and maybe win bragging rights for your erudition.

Other rules are on the Quiz Web page. Quiz closes midnight PST on Dec 25 and results will be announced on Dec 27.