AeroDynamic’s office manager, Matt, receives the first of his pilot certifications with a first-time pass of his Private Pilot checkride! Matt has flown with almost all the instructor’s we have in an effort to round out his flight training, which gave him a boost of confidence for the checkride, and we are so proud to see him succeed. 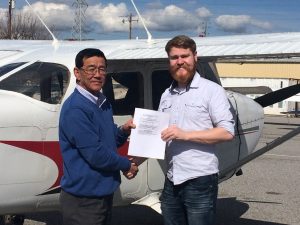 Matt’s first planned flight is to take his girlfriend on a few cross-country trips to show her why he’s so passionate about aviation. A date flight to Harris Ranch should do the trick! Matt plans to continue on with Instrument rating, Commercial and Flight Instructor (CFI) certifications in his pursuit of a career with an airline or corporate company. Thanks for all your hard work in and out of the airplane, Matt. From all of us, congratulations!!!