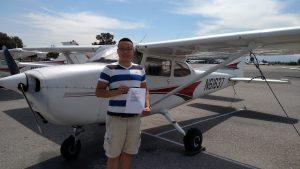 Starting early Monday morning, Richard met with Reid-Hillview examiner Yuzo Wakita for the Private Pilot checkride. Having spent a great deal of time studying and preparing for the practical test, he was in and out of his checkride in record time, passing with flying colors! Well done to both Richard and his instructor Jason. Richard has since been seen sharing his passion for flying – taking the people in his life out for flights around the bay. That’s what it’s all about 🙂

“After 5 months of training with Jason, I’ve finally crossed flying off my bucket list. I’m very excited and looking forward to a lot of fun piloting to come in California as a hobby. Until then, who knows where life will take me.” – Richard