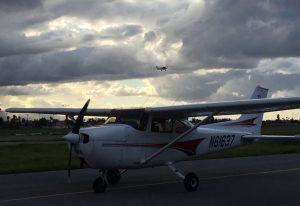 Congrats to Kelsie and her instructor Batelle for this momumental achievement in pilot training. In her own words, “Reason into aviation: Aeronautics major; didn’t get to design an airplane so think I probably should fly one 🙂
Like the idea of just me and beautiful view outside, more or less inspired by the book West with the Night.”

It’s looking to be a banner year for Cessna 61637! This Cessna 172M takes yet another student pilot, Kelsie, on her first solo flight around Reid-Hillview Airport’s traffic pattern. Soon this beloved airplane will also add Kelsie to her distinguished list of pilots who have earned their pilot wings in her white, red and gray airframe.