The final fledgling of the first Friday in 2012 was Armin Monajemi.

It was a beautiful late afternoon at Reid Hillview airport when Armin took Cessna 637 up for three great takeoffs and landings while his CFI Jen Delp-Mallett watched from the ground. 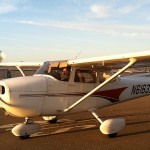 About to go solo! 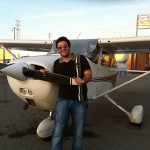 Armin after the flight

Congratulations Armin, and well done also to his instructor Jen.